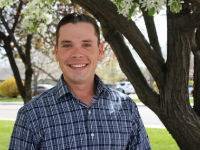 Ed joined BRS in 2007 after graduating with a Master of Architecture degree from the University of Idaho. After working on the BRS team for 3.5 years, he left to gain experience working in the field as a technical representative for one of the world’s largest single-ply roofing manufacturer’s. Ed gained direct field experience from 2011 to 2013 when he returned to his roots at BRS. Since

his return, he has evolved into a Project Manager focusing mainly on government design-build projects, hospitality and various projects in the commercial sector. During the cooler months, Ed enjoys snowboarding, relaxing and traveling, but as the warmer weather comes around, he finds himself engulfed in the great outdoors. Whether he is on the course working on his handicap, or glamping in the vast wilderness, Ed knows how to utilize the beautiful surroundings that he has called home for the entirety of his life.